April brought both more daylight hours and more stress as classes wrapped up and final exams began. Here are a few highlights:

At the beginning of the month, I had the chance to meet up with my cousin Sean and his girlfriend Amanda, who were enjoying their first trip to Reykjavík. Kelsey, Flor and I met up with them one day for lunch (we introduced them to the wonders of Mandi), and then I had them over to the house one afternoon for coffee and brownies. Sean and I had met briefly in 2013 at the Westford Family Reunion in North Dakota, but it was fun to have more time to chat with him and to meet Amanda. We all got along swimmingly and I know they had a wonderful first visit to Iceland and look forward to returning before too long.

One chilly April evening Kelsey and I did the unthinkable: we did something spontaneous. It went something like this: at 8:00 we decided to see a movie. At 9:00 we arrived at the movie theater. If you know either of us, you will realize why this warrants mentioning. The film in question was Fúsi, an Icelandic film that has garnered acclaim at various international film festivals, including Tribeca. The film is in Icelandic and there were no subtitles at our screening, meaning that I caught only about 75% of the dialogue, but was generally able to follow the storyline just fine even without understanding every word. I haven’t seen many Icelandic films, but I would say this one was generally a bit warmer than most, while still maintaining that characteristic Nordic distance and avoiding the neat tied-with-a-bow ending people often complain is characteristic of American films. In other words, it was okay, but not my favorite. I would definitely be interested to see it again with either Icelandic or English subtitles, as that would help fill in some of the gaps where I didn’t understand the dialogue.

In Iceland, Easter isn’t so much a religious holiday as it is a chocolate holiday. And that chocolate takes exactly one form: the strange, famous, and usually immodestly large páskaegg. Easter eggs in Iceland are large, hollow chocolate eggs strangely decorated with plastic flowers and chicks and filled with more candy and a proverb printed on a tiny, rolled-up scroll. I don’t know how this tradition came to be, but tradition it is. Now, normally I’d be totally on board with the idea of giant chocolate eggs. But here’s the thing. I’ve probably mentioned this before, but Icelanders are crazy about milk chocolate. In fact, dark chocolate is generally relegated to the baking aisle at the grocery store, because Icelanders can’t fathom that someone might want to consume non-milk chocolate. In the mountains of páskaeggs at the store, I’m pretty sure I saw exactly one variety that was made of dark chocolate, and I think it was adulterated with licorice, like many of them are. Basically, if you love milk chocolate and licorice, you will probably love páskaeggs. If, like me, you think that licorice is an unforgivable smirch on the culinary landscape, and that dark chocolate is always and forever superior to milk, you will probably be a bit less thrilled with this tradition.

But in the interest of learning, of course I consumed the páskaegg that Ásta gave me.

in all its glory 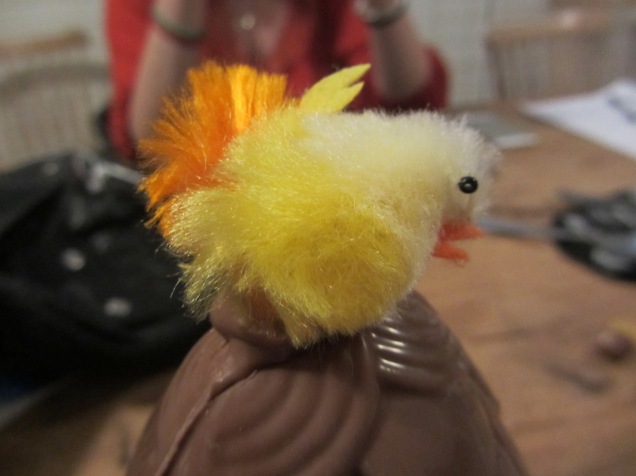 In April I also had the opportunity to visit the US Embassy for the third time. This time around, the occasion was an open house for American citizens living in Iceland (and their partners) to meet the new ambassador, Rob Barber, who took up the post in January after a vacancy of over a year. A couple of my friends had planned to go but had to cancel at the last minute, so I wandered over to Laufásvegur by myself. As it turns out, I only knew about two people there, so I spent most of the time chatting with them and eating mini cupcakes to allay the awkwardness. These sorts of rather formal social situations are not my forté. At all.

Besides the aforementioned mini cupcakes (by far the best of the food offerings), the other major benefit of the event was this:

We went on our last Fulbright field trip in April, this time to Hellisheiðarvirkjun, a geothermal power plant about 20 minutes from downtown. We had planned to go in March, but the weather put the kibosh on that. Scott and Sophie were busy, so it was just me and Alyssa, plus Randver (the new adviser) and Dan (one of the scholars) and his kids and parents, who happened to be visiting from the States.

Honestly, the tour itself was much shorter than I would have expected, consisting mainly of two short videos, plus an opportunity to peek at the inner workings of the plant from a viewing platform. All in all I think it was no more than 15 minutes. But if nothing else, it was nice to get out of the city. Sometimes I forget that the world extends beyond 101. And in typical Icelandic fashion, I ran into not one but two Icelandic acquaintances there within 2 minutes of each other. Ísland er lítið land.

In Iceland, there are really only two seasons: cold, and less cold. April brought the official start of the supposedly “less cold” season, with the holiday “Sumardagurinn fyrsti,” the first day of summer. So how was the weather on the first day of summer? Well, it was sunny part of the day, but the temperature hovered right around freezing and it started to snow at least once. Svona er sumar á Íslandi.  Anyway, our first final exam was the next day, so I spent the morning studying, but then I took a break to wander around town and enjoy the festive atmosphere.

It is traditional for Icelanders to give each other gifts on Sumardagurinn fyrsti (apparently at one point this was the big gift-giving holiday, not Christmas), and I received a cute little gift from Ásta. 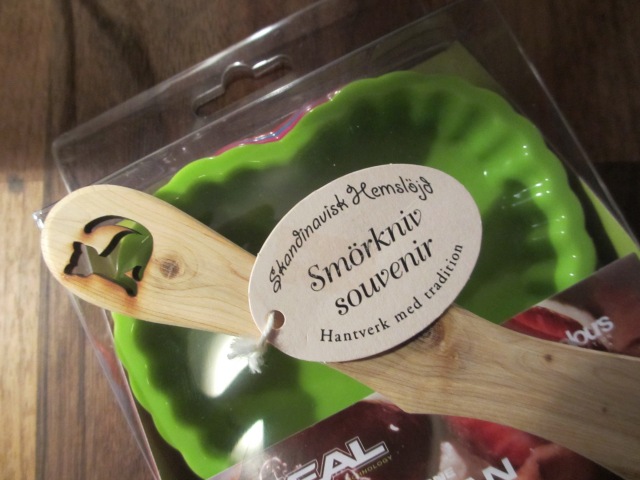 In the evening, sadly, it was back to studying, with our íslenskt mál exam looming the next day.

Thanks to Facebook and the watchfulness of my favorite Corban professor, I found out that a fellow Corban alumna was traveling to Reykjavík. We got in touch on Facebook and ended up meeting for ice cream and pylsur (very Icelandic). Kate graduated a few years after me, so we figured out we probably overlapped one year at Corban, although we never met there. She lives in Colorado now and decided to travel to Iceland for a solo adventure. Always fun to connect with people from my Northwest home.

First exams and a little bit of insanity

The first two (of four total) exams were taken in April, first íslenskt mál and then málfræði (grammar). Our exam schedule this semester was in many ways a lot nicer than last, because we had one exam, and then five days’ break, and then the next, and then a week’s break, so I felt like I could tackle them one at a time instead of trying to study for three or four simultaneously. Grammar, while not necessarily the most difficult exam, is always plenty stressful, as it counts for 100% of our final class grade. The exam went well, but afterward I was drained. Several of us sat at Háskólatorg in a bit of a daze, wondering what had just happened and what the purpose of our lives would be without a grammar final hanging over our heads like the sharp blade of a grammatically correct guillotine. That evening, we ended up having an impromptu dinner party at my house. Homemade macaroni and cheese and salad were consumed, banana cake was baked, Vietnamese hats were donned, cameras were pulled out, and insanity ensued. I think we all needed to blow off some steam. 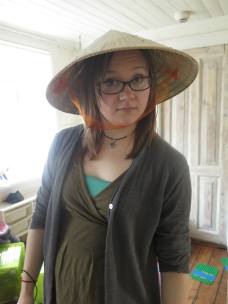 It was without a doubt one of the stranger and more memorable nights of my life in Iceland.